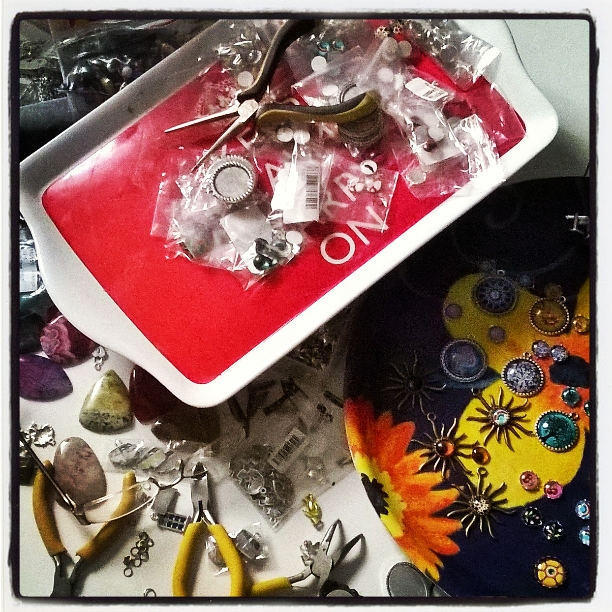 So, it's a couple of weeks into March 2018, with bloody miserable weather outside, I'm freezing cold (after having no proper heating since the end of February, but that's a long story) and I'm wondering how Christmas came and went so quickly?!  Although I'd promised myself I was going to have a break from constantly working till at least late February, I still found myself sorting stock on Christmas day, checking e-mails on New years' day, organising craft fairs/pamper evenings flyers and mailers in-between and attending an outdoor fair at the beginning of February.   It's quite possible that having a smart phone and direct notifications to it 24/7 is effecting my ability to switch off, either that or I'm just a workaholic, or more likely a craftaholic haha!

Crafting became the only business I could run myself almost entirely from home combining making/painting items at my dining room table and promoting/organising online.  As I am a carer for a close relative, I am unable to leave them too often or for long hours, which made working standard hours in an office impossible so working from home and going to events for a few hours 4-5 times a month is perfect. (Well, ok, it's not as perfect as winning the lottery and retiring before the age of 40, but it's as close to it as I can get at the moment lol)  I've lost count of the amount of times I've been painting, making cards or making jewellery through the night, because I just wanted to finish the one I was on and that was 10+ items ago, much like when you're watching a box set and just have to see the next episode :-)  Even though I work from home, I could never be accused of being a slacker, as a lot of the time I'm still working more than 10 hours a day doing various things from social media to making items to emailing, photographing new items, room planning, setting up, promoting, listing new items, etc etc.  Weirdly, a very usual sight is the rather disdainful look from my cat at regular intervals during working through the night.  I haven't yet decided whether he's irritated that I'm keeping him awake or whether he thinks that as I'm already up I should be feeding/stroking him every hour! lol 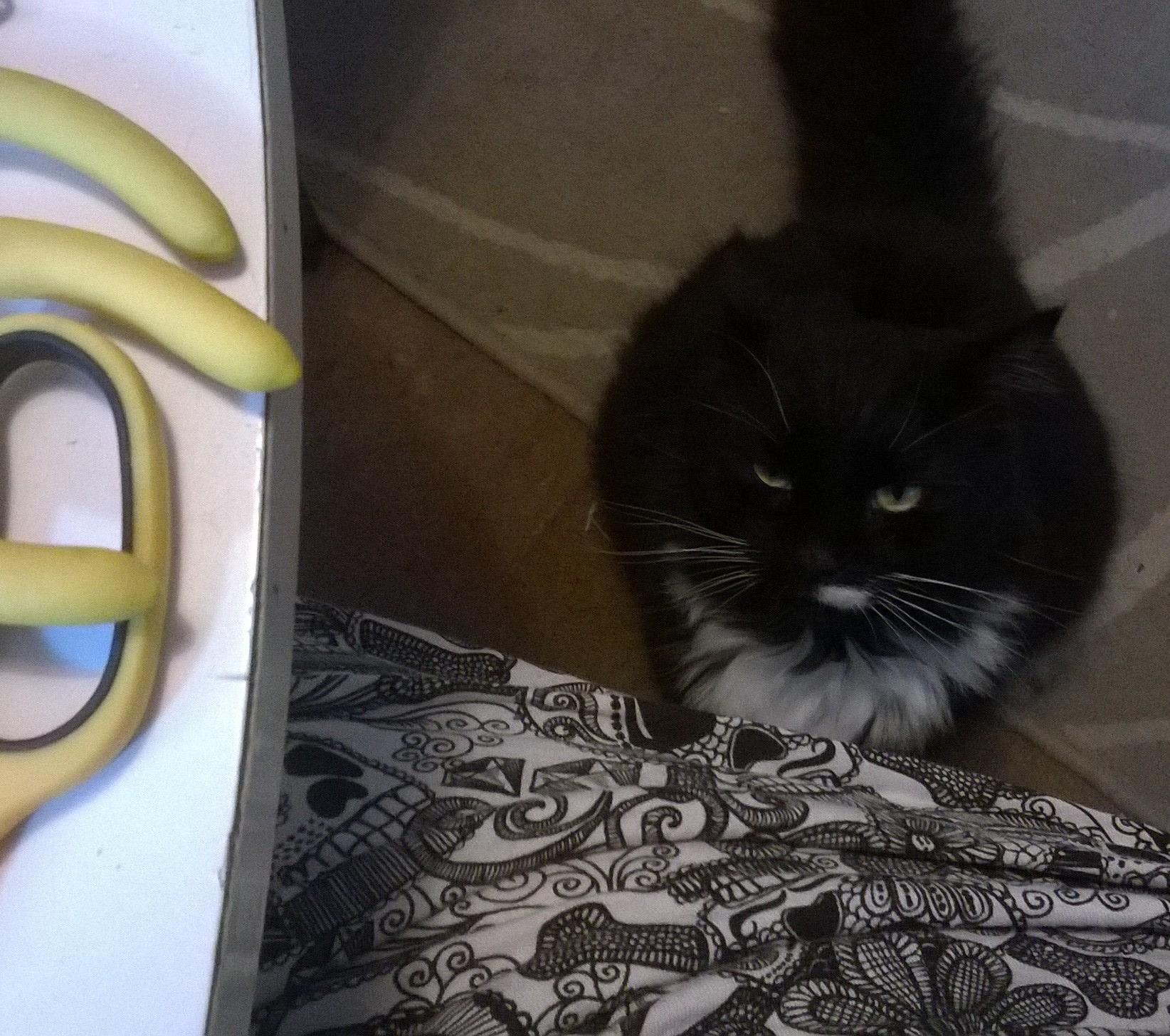 This working from home nonsense really does eat into your spare time, more than I ever thought it would. It's certainly something I overlooked before becoming an events organiser and full time crafter.  I never thought about having to juggle making things, buying materials, taking pictures of them, keeping up to date with loads of social media accounts, answering e-mails at stupid O'clock, building and maintaining 2 websites, constantly moving stock around our rather cramped place, self promoting (not something I enjoy), packing stock for each event, setting up and then packing away and after all that you may have a bad day and take a whole £10, yes all that work for £10, would you do that?  I would've said no a few years ago too, but crafters are mental, we often work long hours with little or no reward and still say how much we love what we do and that IS mad!  But creative people have to be a little outside the box, otherwise we wouldn't be able to make all these fab things ;-)

Many a time after a crappy day out I've thought about giving it all up, not bothering to organise any more events and to stop going to craft fairs with my stuff, but my determination (or in my case, my awkwardness lol) has always made me try again for another year.  Crafting is a very social thing and over the years I have made hundreds of contacts, but more importantly, some really good friends.  It's generally those friends, that know the uphill struggle of trying to make things from scratch and then selling them in person at events who pull you through those doubtful times that we all have and let's face it, those sort of people are invaluable.

I've found that a large amount of the crafters I have encountered during my 5+ years of making (myself included) have at some point suffered with either depression, anxiety, social awkwardness or a severe mental illness and craft (to an extent) has saved or at least helped them.  Crafting is a very social animal, it's not just a business, it's a way of life and those who can't be bothered to make the effort to be sociable/approachable or who only see £££ signs won't last because no one is going to buy from a seller that looks bloody miserable and this is rarely something you can make shedloads of money from on a monthly basis.  It is also not something you can do if you have no passion for what you make or don't really enjoy making things.  Having an idea in your head, buying the materials you need for it and then making something unique from scratch is very rewarding and many have said to me that they find the whole process incredibly therapeutic.

Maybe we are bonkers for standing out in the rain for 6 hours under a gazebo that's tried to fly away 20 times that afternoon just to have 3 small sales that don't even cover the stall fee, but maybe showing people what we can do and what we've made is, deep down actually quite rewarding? Similar to the toddler that isn't happy until the mum has put the new "work of art" on the fridge lol. Simply put, I believe many crafters just want some recognition of a job well done and a good amount of sales so they can go re-stock their craft room without having to hide yet more receipts from the local craft supplier ;-) 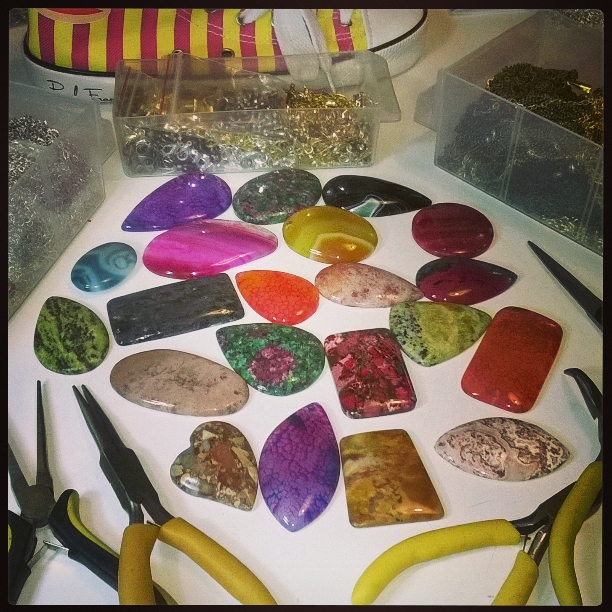 I'm always really grateful to all of my customers, as even if they only spend £1, it's still a £1 that they've chosen to spend with me rather than at the local pound shop or big business you find in every town.  I get genuinely chuffed if I have a few sales at a craft fair/event as that's 3 more people that know about me now and 3 more that may talk to their friends about what I make.  Maybe because I rarely look at profit margins and charts, is why I'm never going to be rich from this, lol, but because I don't do that is probably why I'm still doing what I enjoy, meeting new people and making new things, rather than cutting my losses and then having nothing to occupy my time.

So,  if you love crafting in general, making things from scratch, meeting new people and aren't afraid of lots of hard work, then crafting as a small business is probably for you. It is however very important to remember that you're going to have bad days, bad weeks or even bad months.  The person next to you might have 25 sales that day when you have none, but that doesn't mean that your things are crap, or that the venue didn't work for you, it means that you didn't meet the "right" people that day.  You didn't meet the person that fell in love with the necklace you just made, or the lady that just had to have that scarf you knitted last week, or who thought the birthday card you made last night would be perfect for their best friend.  It's important to remember that you or your work won't always appeal to everyone and that's more than ok.  After all, we don't all shop in the same stores, we don't all have the same budgets or tastes or even the same friends to buy for, so we won't all like the same things.

I'm sure we're all guilty of self doubt and have thought we're not successful enough, especially when you see posts on social media by someone who has 150k followers when you only have 150, but you must ask yourself, how many of those 150k followers are genuine?   How many are local?  How many have they actually met?  How many are actual customers?  Fast growth online is all very well, but what's the point of having 10k followers from Australia if you don't post outside the UK, or if you only sell at your local market in London?   We are so concerned about post likes, followers and being seen by higher and higher numbers that we've stopped questioning why that would be important or even relevant to our little business.   An amusing comparison was an e-mail I received 2+ years ago regarding Twickenham Craft Fairs, the sender of which told me he was located in India.  He said he wanted to "help expand my global reach", after asking why the hell I would want help reaching an audience "further away than India" (having already got that far unassisted) to advertise a community craft fair based in the UK he oddly seemed to disappear lol.

For a society that is so obsessed with selfies, followers, apps and money, we've lost sight of in-person communication and actual customer care rather than exaggerated online appearances and statistics.  If you want to only cater to online sales, then yes your online presence is paramount, but you've got to remain human, rather than being a robot regurgitating website link after website link of how to buy your latest make, otherwise you've lost sight of why you started doing this in the first place.  Add your personality to your work, if you're sarcastic, then add a bit here and there, if you love music maybe tell people the latest cd/download you bought, if you have a family maybe talk about them a bit, but make it your own.  I'm not saying this because "I've made it online", quite the opposite, as I've never really concentrated on online sales as I prefer face to face contact with customers. I prefer to get to know the person buying my item and maybe find out who it is being bought for, rather than just getting an automated e-mail with a delivery address of who to post something to.  I do find it hard to remain focused sometimes though, particularly after seeing another crafter who is contemplating their 2000+ sale online.  It's that very difficult balance between being happy for them and a tad peed off at the same time, but that's human nature and it's natural to feel happy at someone's achievement whilst also questioning your own.  Without trying to sound too deep and meaningful though, we are all on different paths so to speak.  We all have different budgets for advertising, we have varying I.T skills, some have loads of spare time to self promote, whilst others only just manage to fit in a cup of coffee that afternoon, so we really can't compare our level of progress with other people's.  So, I find myself saying, to myself (ok, that did sound bonkers lol) that if I keep at it and it's meant to be, I'll get there eventually and that's really all we can do isn't it.

When I do finally get there, hopefully I'll have met loads more crafting friends on the way :-)